Take electricity from the sun, run it through a charge controller and into a large battery bank. Have an inverter pull that power out of the batteries (when needed) and make it available as pure sinewave current. The trick: do all this inside of an enclosed trailer.Photovoltaic (PV) systems offer numerous advantages. They reduce air pollution and greenhouse gas emissions by cutting back the amount of fossil fuels burned to produce electricity. Buying a PV system for your office or home also minimizes your dependence on utility power, and the savings you accrue over the twenty or more years of a solar panel’s life can be a wise long-term investment.

When most people hear the word “generator”, they think of a small gas or diesel motor and alternator. While these fossil fuel systems are simple and cheap, they have many drawbacks. A traditional generator must run at all times to provide power, which means that the annoying hum of the internal combustion engine and the output of hazardous gasses such as carbon monoxide are always present. Fossil fuel generators must also be refilled with fuel frequently – a costly chore, and a difficult one when working in certain locations. On top of this, maintenance costs such as oil and filter changes, and eventually engine overhauls, add to the cost of the produced watt.

Although the initial cost of a fossil fuel generator may seem enticing, the reality is that the numerous costs associated with operating a generator for several years can add up quickly and make it much less of a bargain than you originally thought. Luckily, there are other options available. 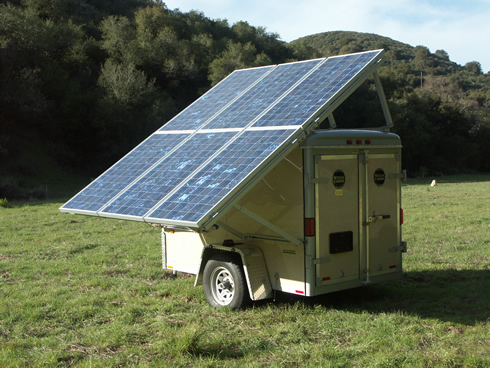 A company in California called Mobile Solar Power is working to change this notion of what a generator is and ought to be. By utilizing off-grid photovoltaic design concepts (i.e., PV panels, batteries, charge controllers and battery inverters) its products provide a reliable alternative to the fossil fuel generator. And unlike traditional generators, these solar generators last for decades.

Their design is simple: take electricity from the sun, run it through a charge controller and into a large battery bank. Have an inverter pull that power out of the batteries (when needed) and make it available as pure sinewave current. The trick: do all this inside of an enclosed trailer.

One of the advantages of a solar generator is its ability to store excess power and run even without power coming in from the sun. A fossil-fuel generator will sit and idle, wasting fuel and slowly eroding the moving parts inside, just to keep an answering machine powered up. When a solar generator is producing more than its current energy demand, the extra electricity is simply saved in the battery banks for later use. A solar generator is also quiet and clean; there’s no background noise or cans of gas behind the shed. And solar generators require very little maintenance – occasionally refilling the batteries with distilled water and wiping off the solar panels with a towel is about as hard as it gets. Solar generators are just as versatile as their fossil fuel counterparts. Smaller solar generators are easy to move, and can provide enough energy for campsites, RV’s, and home construction sites without breaking a sweat. They can be used on farms and ranches to power well pumps. Large solar generators provide enough power for a cabin or small home, and can easily be moved between your permanent residence and summer getaway. Solar generators can also be charged with a combustion generator or utility power. This gives heavy energy users the option of charging the battery bank before beginning the days work, or using the old fossil fuel generator in conjunction with the solar system.

Whether you are looking to help the environment, make a sound long-term investment, or replace your fossil fuel generator with a long lasting, low maintenance system, a solar generator is the right choice for you. You don’t need to deal with that loud, stinky gas generator any more – there is an alternative. Mobile Solar Power’s generators can provide you with the power you need, wherever you need it.

Related Posts
Every new commercial building in France must meet a new building requirement; the roof must be at least partially covered in either solar panels or plants.

The Solar Industry Continues to Heat Up!
Categories