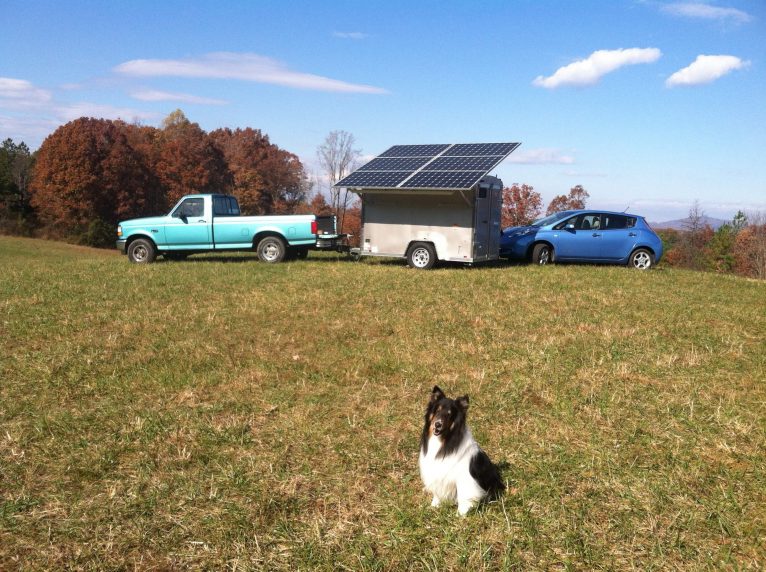 When retired air traffic controller Mark Motto approached Mobile Solar in 2014 he was looking for a solar generator that could do two things.  First, it needed to produce ample clean energy to consistently charge the batteries of his daily driver – a first generation Nissan Leaf.  Second, it needed to be mobile enough to bring on camping trips so that he and his family could enjoy all of the comforts of home while visiting remote campsites without electrical hook-ups.  Mark quickly came to the conclusion that the MS-225 (often refer to as the “hot rod” of solar generators) was the perfect unit for the job.  Its small size and high output inverter system provided everything Mark thought he would need – and more.

Since taking delivery of his MS-225, Mark estimates 20,000 miles have been driven with energy supplied by the system.  Recently he added 6 additional panels on an auxiliary trailer that sits adjacent his MS-225 and feeds power to the MS-unit.  Rain or shine, his solar generator can reliably provide enough energy to propel his Leaf in and out of town for daily errands.  Mark notes that his high output inverters allow for Level 2 charging, on sunny days.  When the weather isn’t cooperating he relies on Level 1 charging.

When it is time to hit the road for one of the family’s frequent camping trips, the trailer is easily disconnected from the auxiliary solar trailer and hooked up to Mark’s truck.  The unit is consistently towed on long-distance road trips (in some cases over 1,000 miles) across the United States and shows no sign of slowing down. The constant shaking and rattling from these outings have proven to be no match for the rock-solid MS-225 and it continues to work flawlessly no matter what is thrown at it, says Mark.

Although the unit has surpassed expectations related to its original duties as car charger and camp site enhancer, Mark has found further enjoyment from its unintended uses.  Now living on a small 42 acre farm in W North Carolina, Mark has discovered the unit to be quite useful in his efforts to maintain and expand his organics-focused agriculture operation.  The mobility of the system allows him to move it around to parts of the farm where electrical power is unavailable. When the polar vortex hits and temperatures drop well below freezing, Mark brings his MS-225 over to the livestock area so that it can provide power to a water heater that keeps the drinking water from freezing. It can also be used to provide light and heat for the chickens in his small coup.

One of Mark’s favorite memories with his unit came when his son-in-law, a licensed building contractor, came out to the farm to build a 40 foot barn.  His son arrived onsite with his crew, power tools and a 5500 watt gas-powered generator.  Mark asked, “what did you bring that thing for?” and pointed to the MS-225 sitting silently in the field.  After some initial heavy skepticism, Mark’s son completed the project without once turning on the gas generator.  He was shocked by the ease with which the solar generator handled his power tools – tools, which gave the gas generator problems.

Despite currently powering both his farm and his vehicle, Mark thinks his MS-225 has yet to reach its full potential. His next endeavor includes hooking the system up to a critical loads panel on his home so that he can keep the lights, fridge and other necessary circuits powered in the somewhat common event of a power outage.

When asked if there were any shortcomings or regrets associated with the unit Mark quipped that his “only regret was not purchasing the unit sooner!” He admitted that going with lighter lithium batteries would make life a little bit easier but he doesn’t feel that the additional cost was worth it.  As a parting note, Mark offered some advice to anyone thinking of purchasing a Mobile Solar generator: “Just as a farmer can never have too big of a tractor, you can never have too much solar!”

Mobile Solar will power the stage for three days of Heirloom Exposition Sept 13-15 in Santa Rosa. Check it out!